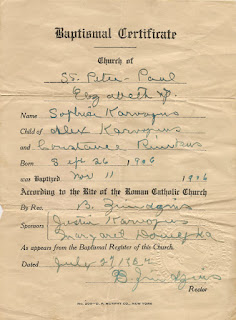 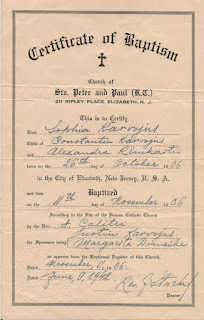 The Perils of Derivative Documents

This is the tale of two baptism certificates. They both record the baptism of my grandmother, Sophie (Karvoius) Dixon. They claim to be "As appears from the Baptismal Register of this Church" but they record somewhat different information.

I think this is a good illustration of the perils of derivative documents. Those are documents that are not created at the time of an event by a person with direct knowledge of an event. They are, instead, generated after an event, copying (sometimes inaccurately) information from another source. Or the facts stated were given by someone who may not have firsthand knowledge of the event.

If I had no prior family knowledge, and I only had the older of these two certificates, I'd be off on a wild goose chase for people who don't exist, and dates that are sketchy at best.

I found helpful guidance on evaluating these documents from the Board for Certification of Genealogists.

However, and it's a big however, these two documents are very much derivative, as they were copied from the register some time after the event. The fact that they give conflicting information proves that copying errors did occur.

But. They are both certified copies, bearing the seal of the church and signatures of the Rector or Pastor who copied the information from the register.

On her website, Evidence Explained, Elizabeth Shown Mills says that certified copies "usually can be treated as originals or equivalents, so long as we are duly critical."

This is me being duly critical


Fact 1: Name of Child
Both certificates list her name as Sophia Karvojus. I will accept this fact as true. The family eventually settled on a different spelling of the last name, and my grandmother had her name "Americanized" to "Sophie." I am confident that both these certificates are accurate on this point based on personal knowledge, and other documents that agree with this point. I have a wedding announcement that gives her name as "Sophia Mary." The last name is spelled so many different ways that I can hardly keep track, but I am confident that this is my Gram.

Fact 2: Parents
The older certificate, issued in what looks like 1924[25?] says that she is the child of Alex Karvojus and Constance Rimkus. I know this is incorrect. The Rector has mixed up the names.

The second certificate, issued in 1942, shows that she is the child of Constantin Karvojus and Alexandra Rimkastis. This is more true, as far as my personal knowledge goes and other documents state. Her father was Constantine [I've also seen it as "Constant"], and her mother was Alexandra [Americanized to "Alice"]. Rimkastis is a new twist. I've always heard my great-grandmother's maiden name as Rimkus. The names here are close enough to what I know and what appears on other documents to accept as true that these are Sophia's parents and their names are some variation of Constantine and Alexandra.

Fact 3: Date of Birth
The documents disagree on the date of her birth. The older document says 26 September 1906. The newer document says 26 October 1906. We always celebrated my grandmother's birthday on October 26. Finding a birth record that confirms this would be great.

Fact 6 : Celebrant
They disagree on who performed the baptism. The older certificate lists B. Z[?]zius, who also signed the certificate. The website of Sts. Peter & Paul Church tells me that Rev. Bartholomew Zindzius was the second pastor of the Parish, serving from April 1896 to March 1924. The date the certificate was issued is 27 July, 192?. The 1942 version says A. Calitri performed the baptism. It is signed by Rev. Star[?]. I don't know that this fact is all that important, but it does highlight the discrepancies between the two documents.


Although the earlier certificate was closer to the event of my grandmother's birth and baptism, just the fact that the Rector got the names of her parents switched around and her birth date wrong causes me to think that this document is unreliable. The only thing it really confirms is the date of the baptism and the names of the witnesses. Maybe that's enough.

These documents support the fact that Sophia Karvojus was baptized on 11 November 1906, and that the witnesses were Justin Karvojus and Margaret [or Margarita] Dorneika. They also support the conclusion that Sophia Karvojus was the child of Constantine and Alexandra Karvojus, with variations in the spelling of the name a minor factor. Positive confirmation of this fact could be made by examining the original Baptismal Register, if it is available or even still exists.

One of the documents confirms the known birth date of Sophia. The other document, because of it's general unreliability, can not be used to confirm this. However, I also don't think that it can be used as a reliable documentation of a conflicting fact for the birth date. It's just that wacky.

Linda Woodward Geiger, "Guidelines for Evaluating Genealogical Resources," OnBoard 14 (May 2008): 14-15. Board for Certification of Genealogists (http://www.bcgcertification.org/skillbuilders/skbld085.html : [02 January 2016]).