The Durant Touring model was Wallace B. Dixon's second vehicle. After the Model T Ford "Sport Racer" this must have seemed like such a sensible family car.

After three years without a vehicle, Wally got the Durant in 1928. He had this car until some time in 1930.(1) By the time he got the Durant, Wally's wife, Sophie (Karvoius) Dixon, had given birth to their two children, Mary Elizabeth and Wallace Andrew. I'm sure a larger car was needed to tote the family around town.

As you can see, the Durant was pretty roomy.

I was able to purchase the Instruction Manual for the Operation and Care of the Durant Model A-22 on eBay. It's 60 pages long, plus a two page fold out illustration of the 39 lubrication points on the car. [Grease gun included with purchase of vehicle!] It's actually a pretty entertaining read. Just to give you some perspective on what new vehicle ownership was like in the 1920's, this caution is given to new Durant owners (2 & 3):

Caution
A NEW CAR SHOULD NEVER BE DRIVEN FAST
A new car should be driven at moderate speed for the first thousand miles. During this important period of a car's life it is not advisable to exceed a speed of
25 miles per hour.(2)

And since you're going that slow it's a good time to learn to drive. Some advice for the novice driver:

"Steering is mostly a matter of confidence,
good judgement and practice."(3)

As with today's auto manuals helpful pictures and diagrams are included, like this one of the driver's controls, that help illustrate the multi-step process required to start the car. Note that the starter button is on the floor, and one apparently drives with one's feet suspended in mid air.

Although my grandfather's Durant was not built there, the Durant Corporation has a special link with Elizabeth, New Jersey.

In 1921 a former CEO of General Motors, William Durant, established Durant Motors, Inc. By December of 1922 Durant Motors had factories in Michigan, California, Canada, Indiana, and Elizabeth, New Jersey. Mr. Durant claimed that the Elizabeth plant, formerly owned by the Willys Corporation, had the capacity to assemble six hundred cars per day, or 150,000 cars per year. This plant produced Durant and Star Cars. (4)

Durant was the third auto manufacturer to be located at the plant on Newark Avenue. During World War I, Duesenberg Motors had a contract to build engines for the U.S. military. The Duesenberg brothers lived on Kilsyth Road, just two blocks from their factory. [As an aside, my mother and I once lived at 950 Kilsyth Road, in a two-family home owned by my Great-Aunt Estelle Karvoius.] With the end of the war the facility was sold to the Willys Corporation who expanded the facility and manufactured cars there for just two years. Durant purchased the property around 1920, enlarging the facility yet again.

The company produced cars up until the 1930's. The Elizabeth location then became a supermarket. When the supermarket went out of business the site became Burry's, maker of baked goods in general, and Girl Scout Cookies in particular. [Another aside: When I was just out of college and working as a temp for Kelly Services I had a long term job at Burry in their offices. I could walk to work - just like the Duesenbergs! - and the air in our neighborhood almost always smelled like cookies.] Burry closed in 2006. The building was destroyed by fire in December of 2011. (5)

I've only got one registration for the Durant. It was issued on 2 July 1929. The registration indicates that the year of this model was  1923.  The Classic Car Database shows that the Durant Company didn't make a Touring model in 1923, but did make one in 1922 and 1924.(6)  However, the 4 cylinder, 24 horsepower engine does match up with the 1922 A-Series Touring model. The Durant Motors Automobile Club offers information on Serial Numbers and shows that Serial Number N 5789 (Touring) was made at the New York plant in 1922. (7)

There are some other issues with personal information on the registration as well. As you can see, the person it was issued to was William Dixon, not Wallace! So, what gives? William A. Dixon, Wally's father, died in 1927 - two years before this registration was issued. I suppose it's possible that Wally inherited the car when his father died and it was just easier to renew the registration with his father's name on it. I'd have to look for probate records to see if that was the case. But read on for another possibility! 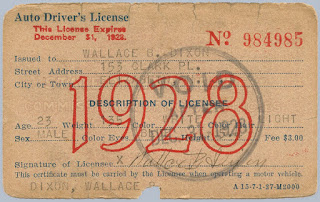 You might notice that, according to his 1928 and 1929 Driver's Licenses, Wallace B. Dixon lived at 153 Clark Place. The registration gives 153 Park Place as the address. 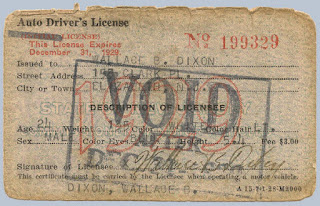 William A. Dixon's residence at his time of death was 67 East Jersey Street. According to the 1929 Elizabeth City Directory, the only Dixons living on Park were Alfred and August Dixon. Wallace B. Dixon is listed at 153 Clark Place. (8)

So what gives? Did the clerk at the DMV have hearing difficulties?  Did my grandfather say "Wallace" and "Clark" and the clerk heard "William" and "Park." I don't know that I'll every figure this one out. It just goes to show that even "official" documents can contain questionable information!

Special Thanks and Some Links

I'd like to thank Josh from Barn Finds.com for letting me use the two photographs of the 1923 Durant Touring model that I found on his website. If you like to look at vintage cars, you should definitely check out his website!

You can find more information about the Durant Company and it's automobiles at the following:

(1) Wallace B. Dixon, handwritten note listing all the cars he owned and addresses he lived at. Wallace B. Dixon Collection, privately held by his grandaughter, E. Ackermann, 2016.