Well, howdy friends. Have you ever been this close to  solving a family history mystery only to be thwarted by a missing or misplaced document or file? I sincerely hope not, because I'm here to tell you that it is great big no fun.

Here's the situation. My great-great-grandfather, John Dixon (b.abt. 1837, d. after 1917) was a veteran of the Civil War. He enlisted in 1861 and deserted two month after he mustered in. [He was later pardoned and served with his regiment through the end of the war.] I have a theory that he deserted because his wife, Isabel was either having trouble with her pregnancy, or their infant children (I believe she gave birth to twins) were not doing well. I had hoped to find his Court Martial files with the case notes to discover what reason he gave for deserting the Army.

Natually, I turned to Debbie Hadley of Bring Out Yer Dead, who does research for me in New Jersey. She was going to be spending some time at the National Archives in Washington, D.C. and agreed to dig up the court martial case file for me.

The Good, the Bad, and the Letter from Abraham Lincoln

The good news : Debbie did find a file relating to my John Dixon.

The bad news : the transcript of the trial was missing.

The good news : there was some useful information in the file, including the name of the officer who requested John's pardon and return to duty. There were also a lot of notes about where the files had been sent. They got around a bit and the clerks dutifully noted the particulars.

The bad news : There was no mention of the final resting place of the file. They don't appear to be at the National Archives. Which means they could be in any number of places, or they may no longer exist. Vexing.

And then there's the letter from Abraham Lincoln. Naturally, it's not addressed to or written about John Dixon, though his case is mentioned in some of the notes written on the letter. The letter itself concerns one Joshua Francis Noble. It appears Joshua deserted at the same time as John, from the same regiment, was court martialed and sentenced at the same time, and also had a pardon requested by the same officer as John. The letter is President Lincoln's inquiry into the status of Joshua Noble's case on behalf of Joshua's wife. The poor man had been sentenced to prison in the Tortugas, and although the pardon was approved, the paperwork was misplaced. Eventually he got sorted out and returned to his regiment.

Here's the President's letter. You can click on the image to make it larger.

Here's the response from the Judge Advocate General, and a sideways note from Mr. Lincoln. Ditto with the click to enlarge.


And here are the notes written on the back of the paper. Ditto, click, enlarge. 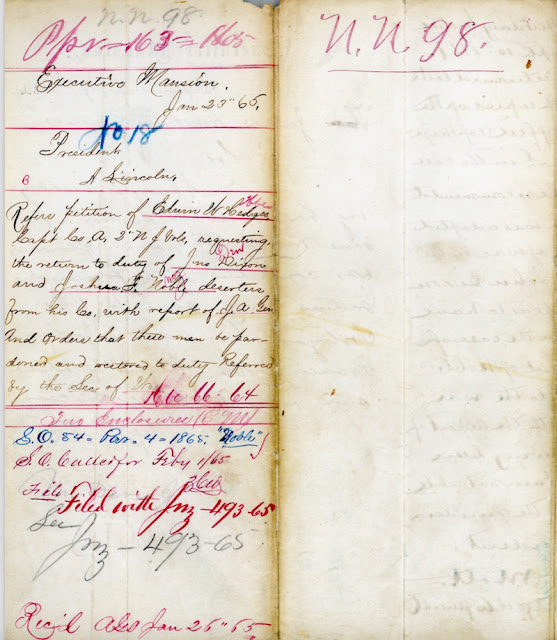 Summary of the cases of Dixon and Noble, with mysterious clerical notations. (1)

If you have any suggestions on where one would look for the missing court transcripts, please leave a comment or send me a note.

I'll be writing more about John Dixon soon, and will also put a transcript of the documents that were in the file up here on the blog.