It's less than one mile from 326 East Jersey Street, Elizabeth, New Jersey, to the South Front Street Bridge. Taking a 15 minute walk, down East Jersey Street to the waterfront, where the Staten Island Sound meets Newark Bay you pass one- and two-family homes, small apartment buildings, and locally owned businesses. As you cross First Street, you're just one block from the water. Today, when you get to the waterfront, you'll see a marina and a waterfront park. In 1915 the area was more industrial. Ship yards and manufacturing facilities edged the water, along with rail-lines for transporting goods.

On a Sunday in June, 1915, with leisure time at hand, 9-year-olds Bernard Dixon [later known as Wallace Bernard] and Andrew Payne, were ready for an afternoon of play. They left the house at 2 o'clock under strict orders to stay away from the docks. Three friends joined the pair and the five boys headed straight for the waterfront.

They ended up at the old South Front Street bridge, which crossed the Elizabeth River. The Crescent Ship Yard was on the near side of the bridge and the river, and they would have been able to see the New Jersey Dry Dock Company just across the bridge.

Also on the other side of the bridge, about 200 feet down the road at 3 South Front Street, was the boathouse belonging to John W. Van Pelt & Son. The Van Pelts were in the business of renting boats. John W. was about 73 years old in 1915, and in the New Jersey State Census of that year his occupation was listed as "Bridgeman." John H. Van Pelt, John W.'s son, was 45 years old that year, and his occupation was Boatman.

The boys reached the river bank, and were playing there for about an hour when Bernard stepped on a log at the edge of the river near the bridge. One of his friends gave him a playful shove, and into the water he went!

Mr. Van Pelt heard the boys screaming and yelling for help and ran the 200 feet from his boathouse to the river bank, diving into the water to save Bernard. The panicked boy had, by the time Mr. Van Pelt arrived, sunk under the water of the river for the third time! Only his cap floating on the surface marked the place where he had gone down. Using that as a marker, Van Pelt dove to the bottom of the river where he was able to find Bernard and grab his coat collar. Draging the dazed boy to the surface, Van Pelt quickly revived him.

Bernard was the fifth child that Mr. Van Pelt had rescued at what seemed to be a popular spot for children to play.

I never, ever heard my grandfather talk about this nearly fatal event in his life. Maybe he didn't think it was any big deal, or maybe he just didn't want to remember it. If I hadn't been searching the 1915 Elizabeth Daily Journal for information on a different ancestor it's possible I never would have come across the article that tells the tale.

Thanks to the quick thinking of John Van Pelt, I'm here today to share the story with you.

PLUNGES INTO RIVER TO SAVE LITTLE BOY

Bernard Wallace Dixon, aged 9 years, had a narrow escape from death by drowning Saturday afternoon, and John Van Pelt, proprietor of the boathouse on South Front street by the Elizabeth river, is in line for a hero medal. This is the fifth child he has rescued from drowning in two years at the same spot where the Dixon boy almost lost his life.

The boy is the son of Mrs. Mary Dixon, of 326 East Jersey street. About two o’clock Saturday afternoon he and a chum, Andrew Payne, aged 9 years, who boards with the Dixons, ran away to the waterfront. The boys had been given strict orders to avoid the docks, but with a party of three other own age, they slipped away for an after noon’s play.

About an hour after they reached the South Front street drawbridge the Dixon boy mounted a log on the edge of the river near the bridge. One of the boys playfully gave him a push, and the lad lost his balance and fell in. The boy who pushed him became frightened and ran away. The other boys screamed and the struggling youngster in the water also had the presence of mind to cry for help.

Mr. Van Pelt, who was across the bridge about 200 feet from the scene, heard the cries and ran from the boathouse to the edge of the river. He dived for the Dixon boy, who had then gone down for the third time. The position of the latter’s hat indicated the point for which to dive, and the quick work of the rescuer came in the nick of time. Groping on the bottom, Mr. Van Pelt got a firm hold on the lad’s coat collar and brought him, dazed to the surface. It required but a short time to revive him.


And, Finally, a Bit About the South Front Street Bridge


At the time my grandfather "went down for the third time," the bridge at South Front Street was doing the same.

By 1889, a draw bridge spanned the river at South Front Street. As industrial growth spread south of the Elizabeth River into the Bayway section of Elizabeth, the crossing provided an important link between the Elizabethport and Bayway areas. Lumber businesses that were initially located on the north side of the river eventually expanded their operations south to the area located along South Front Street and Arthur Kill with spur lines connecting to rail transportation. Industrial growth continued during the boom years surrounding World War I and through the 1920s when the current bridge was constructed (Sanborn 1889, 1903, 1923; Bauer 1906). (3)

According to a report in the Elizabeth Daily Journal on May 7, 1915 the bridge was seeing a lot of vehicular traffic that was beyond it's capacity:


The committee on drawbridges pointed out that the South Front street bridge is ovetaxed with modern motor traffic loads of ten and twelve tons frequently going over the old structure, built in 1871, while the safety capacity is scarcely more than seven tons. It stated that the South First street bridge is ample for all traffic, but asked that the Board of Works be requested to fix up the streets leading to it, which were said to be in deplorable condition. The report and accompanying resolution were adopted.

With the advent of World War I, issues of transportation, defense, and resource allocation opened the next chapter in the bridge's story. According to the excellent website, bridgesnyc.com :


Plans for a movable bridge at South Front Street were approved on July 3, 1916 by the Secretary of War. A riparian grant (a deed granted for normally state-owned tidelands) was obtained for $260 from the state of New Jersey in 1917, officially allowing the bridge to be constructed by the City of Elizabeth. The American Bridge Company built the bridge, beginning in 1920; it opened to traffic in 1922.

Bridgesnyc points out that the South Front Street bridge was, at one time, one of six moveable bridges that allowed the Elizabeth River to accomodate ocean-going vessels. When the NJ Turnpike opened in 1951 shipping shifted from the water to the highway and the decline of heavy river traffic began, and with it the decline of the county's bridges on the Elizabeth River.

Although the bridge had been slated for repairs as late as 2011. However, structural concerns caused the city to leave the bridge in the open position and eventually to close it completely. Good for river traffic, but vehicular traffic had to be routed to the South First Street bridge. (4)

As of January 2018, this was the state of the bridge, left in the open position. Click on the image to enlarge it. (5) 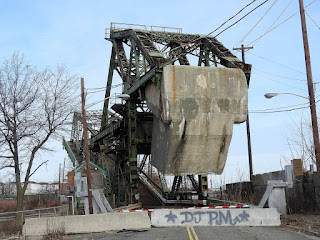 (4) "South Front Street Bridge," posted by shayna, December 20, 2011. bridgesnyc: Bridges in the New York Metropolitan Area. Website < http://www.bridgesnyc.com/2011/12/south-front-street-bridge/ > viewed 6 October 2019. The article has many good photographs and gives a succinct  history of the bridge, it's unique design, and the location next to the superfund site of the Chemical Control Compnay. For photos dating from August 2015, see also the website LTV Squad < http://ltvsquad.com/2015/09/09/south-front-street-bridge-elizabeth-nj/ >.