The 1949 Nash was the company's first postwar model, and was completely redesigned from previous edition. It's curvy uni-body construction led to it's nickname of "bathtub." Based on the serial number, Wallace B. Dixon's 1949 Nash was a "600" model, built in Kenosha, Wisconsin, which had the same basic body with a shorter front end than the more expensive "Ambassador" model. The average base price of the Nash 600 models was $1,877. The literature claims that the Nash '600' got over 25 miles per gallon at average highway speed. (1)

I have actual photos of my grandfather's own Nash parked in front of my grandparent's house at 1023 Thompson Ave. in Roselle. They moved into that house in 1952, so the Nash was still fairly new, and would continue to be a feature in that driveway for six more years after these photos were taken in 1953.


Wally must have bought the Nash when it was brand spankin' new. I can see why he kept it for so long. Seriously, look at this beauty. And windshield wipers come standard! I wonder if he paid for the add-on turn signals. (1)

Standard equipment included:
Custom add-ons:
Here are a few more Nash photos from the Barrett-Jackson website, just to give you a some more views of a similar car. 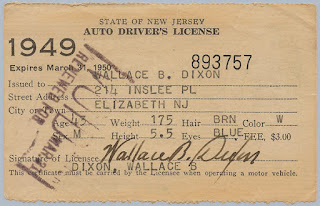 If you care to look at the legal documents, you'll see that Wally hasn't changed much, though the look of the driver's license did. I'm including the images here just for form's sake. 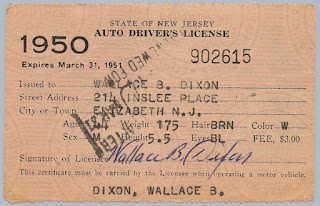 That amazing car had two homes, 214 Inslee Place in Elizabeth, and 1023 Thompson Avenue in Roselle. I'm sorry I don't have a registration to prove that, but the photos at the top of the page tell that story.

The Inslee Place address is right on "down the Port" and is a neighborhood that I remember from my childhood - going to pick up my grandmother from work at Singers, and Sunday Mass at Sts. Peter and Paul church. 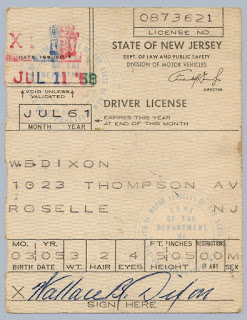 The house on Thompson Avenue was the first home that my grandparents owned, and it is, essentially, the place where I spent my childhood after school, on weekends, and during the summer. My mother and I lived just across the street.

The Nash was gone before I was born, and I'm grateful that I have some photos of it!

Photographs of the Dixon home, Wallace B. Dixon Collection; privately held by Elizabeth Ackermann, [address for private use], 2016. Inherited by his daughter, Mary E. Dixon Traina, and then by her daughter, E. Ackermann. 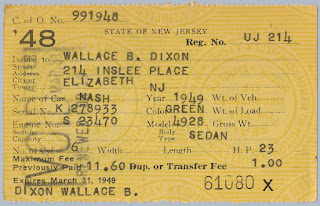 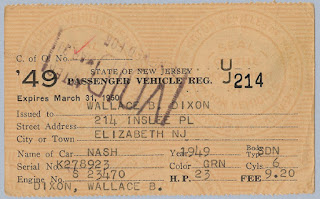 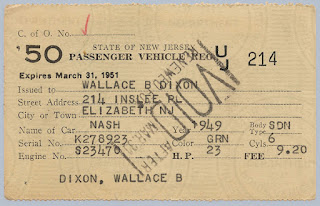 Images of driver's licenses and car registrations, as well as those of the Dixon home and vehicle are from my private collection. Happy to share, just ask.